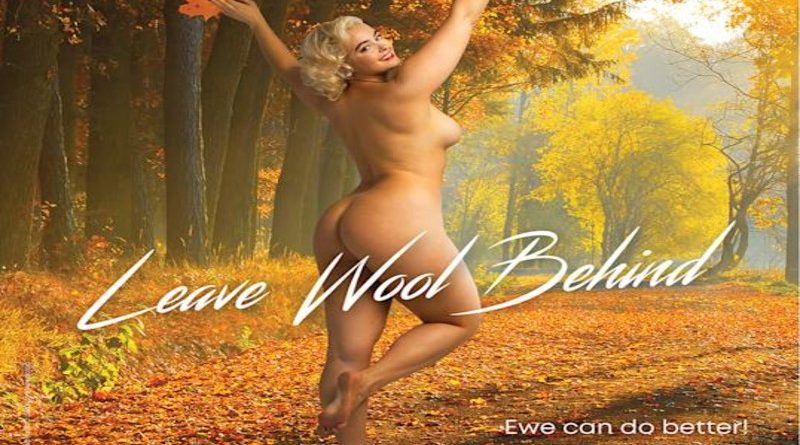 For Aussie model Stefania Ferrario, posing up a storm in swimwear and lingerie — and sometimes, even less — is all in a day’s work.

But the 28-year-old’s latest shoot, which saw her go completely nude for animal rights group PETA, was extra special.

In the ad, Stefania gleefully throws autumn leaves in the air while walking down a country road, with a tagline that urges people to ‘Leave Wool Behind’.

She tells Yahoo Lifestyle in an exclusive chat that being approached by PETA to front their latest campaign was ‘a dream come true’.

“So with PETA, [the nude shoot] came very naturally, and if anything, I found that it had that next level of empowerment because it wasn’t just about me, it was going beyond me.”

As a long-time animal lover and a vegan of more than a year and a half, Stefania jumped at the chance to educate the public on what PETA is calling wool ‘myths’.

Over a dozen of PETA’s investigations into shearing sheds all over the world, including six in Australia, have shown instances of ‘extreme cruelty’ to sheep.

“When people think about the wool industry they don’t think about animal cruelty,” Stefania explains.

“You think, ‘Oh shearing is a nice thing, you know, the sheep gets shorn,’ and there’s this misconception that it’s not a cruel industry and the sheep are treated well,” she adds.

On top of that, wool is often thought of as an eco-friendly material, but in reality, it’s ranked on the Higg Materials Sustainability Index as worse for the environment than man-made materials such as polyurethane, nylon and acrylic.

Instead, Stefania looks for fabrics made of ethical, renewable sources such as hemp, bamboo and organic cotton when shopping for clothes.

“It’s about looking at what the fabric is made out of, where’s it coming from, is it made locally and just becoming a little bit more educated as the consumer.

Stefania admits that switching to a vegan lifestyle can seem daunting because there’s a certain pressure on people to get rid of every single animal product from their fridge, wardrobe and house overnight.

While you certainly can do that, others might feel less overwhelmed by making small, conscious changes over a longer period of time.

After wanting to go vegan for several years, Stefania bit the bullet on New Year’s Day 2020 and ‘hasn’t looked back’.

“My biggest regret is not having gone vegan sooner and I would hate for it to be other people’s biggest regret too because every day, I’m like, God, I wish I’d done it sooner. And it’s a lot easier than people realize.”