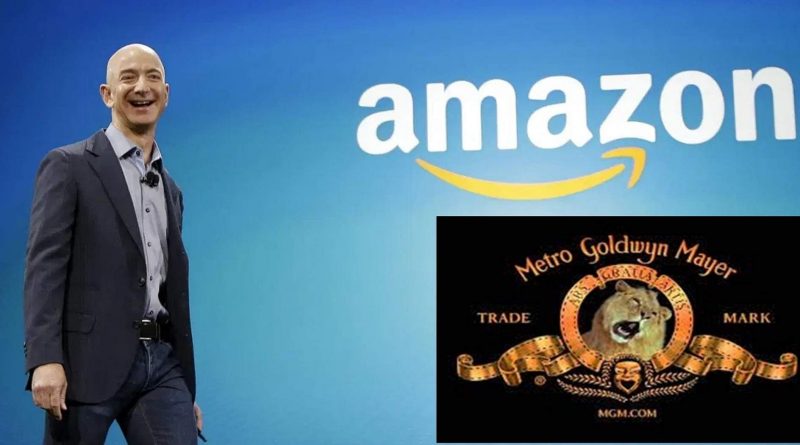 Looking ahead at his schedule for the next year, MGM’s Mike DeLuca knows his Channing Tatum movie is in a tricky spot. “Dog,” which doubles as Tatum’s directorial debut, is scheduled to open February 18.

Thanks to pandemic-related delays, three other wide releases are slated to open the same day, including “Uncharted,” an action-adventure movie based on a popular video game, and “Ambulance,” a thriller by director Michael Bay. Tatum is also the star of another movie, “The Lost City of D,” due out just a month later. It will require his promotional attention.

But when executives at MGM and its sister distribution company discussed delaying “Dog” to August, where the schedule is lighter, DeLuca demurred. The company is confident in the movie and the date, and has a plan to target viewers in more rural, conservative states with its modestly budgeted comedy about a traumatized veteran.

Yet there is another factor that looms over the decision: Amazon. The e-commerce giant is acquiring MGM in a deal that is expected to close some time next year. Amazon has not said whether it plans to keep the top executives at MGM, nor whether it will release its existing slate of projects in movie theaters. Facing this uncertainty, DeLuca has an incentive to release his movies in theaters while he still has the chance.

MGM said the Amazon deal had nothing to do with its decision.

Ever since DeLuca and Pamela Abdy took control of MGM’s film division last January, they attempted to revive a moribund movie studio by pursuing adult dramas from high-profile filmmakers. “Dog” was one of DeLuca’s very first purchases, and one of his least expensive. He bought the domestic rights in March of last year.

MGM has since taken big swing after big swing, and it is about to release some of the first movies of the DeLuca-Abdy regime. That includes Ridley Scott’s “House of Gucci,” Paul Thomas Anderson’s “Licorice Pizza” and Joe Wright’s “Cyrano.”

These movies are guaranteed to earn MGM Oscar nominations and rave reviews for the first time in a long time. MGM hasn’t won the Academy Award for best picture since 1991. It’s less clear if they are going to make any money, but they have made MGM a popular place for talent (and their representatives).

Most movie studios won’t fund adult dramas anymore because they aren’t as lucrative as pre-branded comic book adaptations and or as reliable as sequels. If studios do make them, it’s usually on a tight budget – or for a streaming service.

Hollywood producers and representatives are worried this Amazon deal will take away one of the few studios willing to release a $50 million drama in theaters. Disney already eliminated one major movie studio when it acquired 20th Century Fox.

Fueling this anxiety is the uncertainty about Amazon’s plans. Nearly a decade after the creation of Amazon Studios, the company remains an enigma. It has the second largest base of users after Netflix, but it’s not clear how many of those people use the service on a regular basis. For all the time and money it has spent in Hollywood, the company has more critical darlings (like “Fleabag” and “Transparent”) than commercial hits.

The company has spent lavishly on select titles (like its “Lord of the Rings” series) while cutting back on big spending in unscripted programming and even on some scripted shows.

When Amazon executives held an all-hands meeting with MGM staff on Oct. 1 to discuss their plans, Jennifer Salke and Albert Cheng mostly touted their upcoming slate of TV shows. They didn’t say much about movies (or movie theaters).

MGM shareholders and top Hollywood talent agents have lobbied Amazon to treat MGM like a standalone label under the Amazon umbrella. Think of it as Pixar or Marvel at Disney. This would, in theory, give DeLuca and Abdy freedom to keep making the kinds of movies they’ve been doing.

Amazon doesn’t have film executives with the same experience as DeLuca and Abdy, nor does it have much of a track record. Its biggest hits are all movies it acquired from other studios during the pandemic, “Coming 2 America,” “Without Remorse” and the “Borat” sequel.

Amazon declined to comment on its plans for MGM. The company has said it bought the company because of its library, and plans to remake its titles at TV shows and movies. It has said little else.

The company is going to act in the interest of its shareholders. It wants to drive customers to its streaming service because that is supposed to convince more people to shop. While MGM could remain separate in the short-term, most executives expect Amazon to absorb the studio in the long run. For all of MGM’s history, its brand doesn’t stand for a specific type of programming like Marvel or Pixar do.

But there is good news for doomsayers in Hollywood. Amazon wants to compete for Oscars. Jeff Bezos has been a fixture of the awards circuit for years, and if there’s one thing he hates more than wasting money… it’s losing.