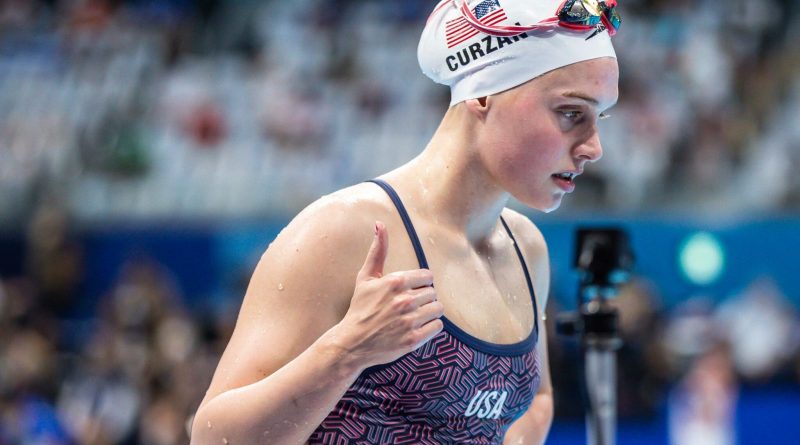 BUDAPEST — The U.S. shattered the record for world swimming championships medals, winning eight more on the final day to finish with 45.

The U.S. closed out competition Saturday with gold in the men’s 50m backstroke (Justin Ress, who was disqualified, then had it overturned on appeal) and the women’s 4x100m medley relay.

“We have crushed it this whole week,” said Regan Smith, who led off the relay and also won the individual 100m back earlier in the meet. “We’ve had such good energy. This team is really special. It’s like no other team I’ve ever been on.”

Hunter Armstrong added silver in the 50m back, and the men’s medley relay also got silver.

Bobby Finke earned silver in the 1500m free (in an American record time) behind Italian Gregorio Paltrinieri, who posted the second-fastest time in history.

Erika Brown tied for bronze in the 50m free for her first individual medal at a global championships after nine relay medals. Sweden’s Sarah Sjostrom won the splash and dash for her 19th career individual world champs medal, one shy of Michael Phelps‘ record.

The Americans, who topped the total medal standings at every Olympics and worlds since the end of the dubious East German reign in 1988, were expected to dominate this week.

Russians were banned due to the war in Ukraine. Some top swimmers from Australia, Canada and South Africa sat out or limited their schedules ahead of their quadrennial Commonwealth Games later this summer. Other stars missed out due to injury or COVID.

The Americans were led once again by Katie Ledecky, who swept her four events (in the absence of Australian rival Ariarne Titmus) and finished on Friday. Caeleb Dressel won two golds, then withdrew from the meet due to unspecified medical reasons.

The biggest breakouts were international.

McIntosh, who had a pair of fourth-place Tokyo Olympic finishes at age 14, won the 200m fly and 400m IM and took second to Ledecky in the 400m free this week.

Hungarian Kristof Milak was the face of the meet, breaking his 200m butterfly world record and adding the 100m fly title in the absence of Dressel, the Olympic gold medalist and world record holder. Between Popovici and Milak, Dressel has major challengers in two of his three individual Olympic title events.

The most anticipated showdowns in the sport — Ledecky vs. Titmus, Dressel vs. Milak and Popovici, even Huske against Australian Emma McKeon in the 100m fly — did not take place here.

They must wait until, likely, next July’s world championships in Fukuoka, Japan, which will determine the early favorites for the 2024 Paris Olympics.